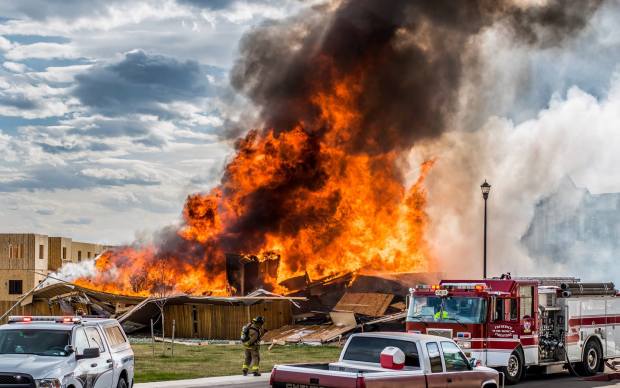 A home explosion in Firestone Monday, April 17, 2017 killed two and sent two people to the hospital. Dennis Herrera/ Special to The Denver Post

At least a dozen explosions and fires have occurred along Colorado oil and gas industry pipelines in the eight months since two men were killed when a home blew up in Firestone, a Denver Post review of state records found. Two of those explosions killed workers.

The state has not taken any enforcement action in the April 17 Firestone deaths, saying there is no rule — and none is proposed — covering oil and gas industry accidents that lead to fatalities.

Colorado oil and gas industry regulators have responded to the Firestone disaster by proposing modifications of existing rules — to be hashed out in meetings next month — for pipelines under well pads that they call “flowlines.”

But none of the changes deals with industrial accidents that result in deaths. The Colorado Oil and Gas Conservation Commission, set up by lawmakers to ensure orderly extraction of oil and gas consistent with environmental protection and public safety, lacks the authority to punish companies for fatal explosions, agency spokesman Todd Hartman said.

Any COGCC enforcement action for other reasons against Anadarko Petroleum would have to begin “within one year of discovery of a violation,” Hartman said in a prepared response to Denver Post queries.  Anadarko owned the leaking underground line blamed for the Firestone disaster.

“The COGCC’s focus is on the release of hydrocarbons into the environment, an issue that falls within the agency’s jurisdiction,” Hartman said. “COGCC continues to evaluate the underlying facts at issue, including facts that may be developed through the ongoing National Transportation Safety Board investigation in which COGCC is a participating party.”

State information officers did not respond to repeated requests to hear directly from COGCC director Matt Lepore on environmental and public health risks from fires and explosions.

NTSB investigators still are gathering information on the Firestone blast and no conclusions have been reached, NTSB spokesman Keith Holloway said. But that agency, too, lacks enforcement authority and will not take action against Anadarko, Holloway said.

“The NTSB’s investigation is purely from a safety perspective,” he said. “NTSB is not a regulatory agency and does not have any enforcement authority and therefore will not levy penalties or look at the accident from a criminal perspective. I’m not exactly sure who would impose penalties in this case.”

After the Firestone disaster, data that Colorado regulators obtained from oil and gas companies reveal 120,815 underground flowline segments within 1,000 feet of buildings. The data show 428 segments failed integrity tests. State regulators have not determined how many miles of underground lines this represents, Hartman said. Nor have maps been made to find the locations of underground lines in relation to Colorado’s growing Front Range communities.

The oil and gas industry also is expanding, with the latest state records indicating more than 54,600 active wells statewide and quadrupled production since 2012. Much of the new oil extracted in Colorado comes from increasingly populated Weld County, north of Denver.

Anadarko Petroleum, company spokeswoman Jennifer Brice said, “will continue to cooperate with all agencies, including the National Transportation Safety Board and the COGCC, until all investigations are complete, while also continuing to work with regulators, elected officials and others to build upon the actions we’ve already taken to improve safety.”

The following are among at least 12 fires and explosions at oil and gas facilities after the Firestone blast:

• One Anadarko contract worker was killed and two others were injured May 25 when a tank exploded near Mead. The workers were changing “dump lines” and “one or more tanks exploded,” according to a report filed in COGCC’s database. The U.S. Occupational Health and Safety recently issued citations to Anadarko and three contractor companies for violations at the site, with penalties totaling about $70,000, OSHA area director Herb Gibson said.

• A 61-year-old man died after fire broke out Nov. 16 during work on a blocked DCP Midstream oil and gas pipeline near Galeton, east of Greeley. That man, later identified as George Cottingham of Greeley, was one of three workers injured in the fire. The COGCC did not receive a report on this incident, Hartman said, because the pipeline was a “gathering line” outside the agency’s regulatory purview.

• A worker was injured May 8 near Greeley when fumes from a Synergy Resources Corp. tank ignited. Greeley firefighters responded.

• A worker was injured June 19 in Weld County after a fire at a Great Western Operating Company well pad. The company report to COGCC said “leaking valve and fluid caught fire” and “one person was taken to the hospital.” The worker was treated and released.

•  At the north edge of Brighton, a truck driver sought medical care but was not hospitalized after fleeing a fire that broke out Oct. 12 at a Great Western facility. Brighton firefighters racing to the scene asked contractors to close off gas flows from wells, according to the COGCC report. This fire was the second in a three-week period at the same site. On Sept. 20, Brighton firefighters “set unmanned ground valves to spray cool water on other process equipment as a mitigation technique to isolate the incident.”

• On Nov. 7, hydrocarbons spilled into a combustion device, causing it to catch fire at SRC Energy facilities in Weld County. Greeley firefighters responded. No injuries were reported.

• On Sept. 12, a lightning strike apparently led to an explosion at Berry Petroleum facilities in Garfield County. The blast blew a 300-barrel tank 150 yards. A Grand Valley Fire Department crew sprayed foam when they arrived to douse flames in “smoldering metal and insulation.”

• On July 30, a lightning strike caused a power failure that resulted in a fire in Cheyenne County at Citation Oil and Gas Corp facilities. The COGCC report said:  “Fire was burning from the thief hatch and 2-inch vent riser. The Cheyenne Wells Fire Department responded and used foam to extinguish the fire.”

• On Sept. 11, a Platte Valley Fire District crew put out a fire at a Great Western facility in Weld County after “a leased compressor” caught on fire at a well pad. “The rental company … is scheduling a full investigation, which will include the root cause analysis,” a COGCC form said.

The Firestone explosion called into question public safety and environmental protection amid the expansion of oil and gas operations near people. Gov. John Hickenlooper said Colorado officials would do everything possible to make sure such a disaster never happens again.

One proposed rule change would require companies to cut off flowlines connected to oil and gas wells when they abandon wells. Another change would require companies to test all flowlines to make sure they are not leaking — not just high pressure lines as at present. Companies would have to report more incidents involving fires, injuries and fatalities. And the COGCC could begin to regulate the “gathering lines” that link the flowlines closest to wellheads with larger interstate pipelines that carry fuels to refineries.

The Colorado Oil and Gas Association industry group and several of its member companies are participating in a safety working group initiated by Hickenlooper.

“There are safety councils in Colorado’s different oil and gas basins that exist to promote safety and environmental protection within the industry. By and large, the oil and gas sector has a solid safety record,” COGA president Dan Haley said. “The results of the state’s first-of-its kind, comprehensive exam of flowlines, with a 99.65 percent passage rate, demonstrate our ongoing commitment to safety. Out of the small remainder, no major leaks were reported, and the upcoming flowline rulemaking at the COGCC will further strengthen existing safety rules.”

Yet some Colorado Front Range families living near oil and gas facilities remain worried and have joined “protectors” groups that protest industry expansion near people. The recent fires and explosions have piqued concerns.

“I’m sure there are pipelines under my house. But I don’t know where they are,” Erie resident David Adler, 25, said while holding his 1-year-old daughter, Harper, at a recent neighborhood demonstration. “After Firestone, I would like the lines to be mapped. I am afraid I’ll have natural gas leaking into my house and that it could cause an explosion.”