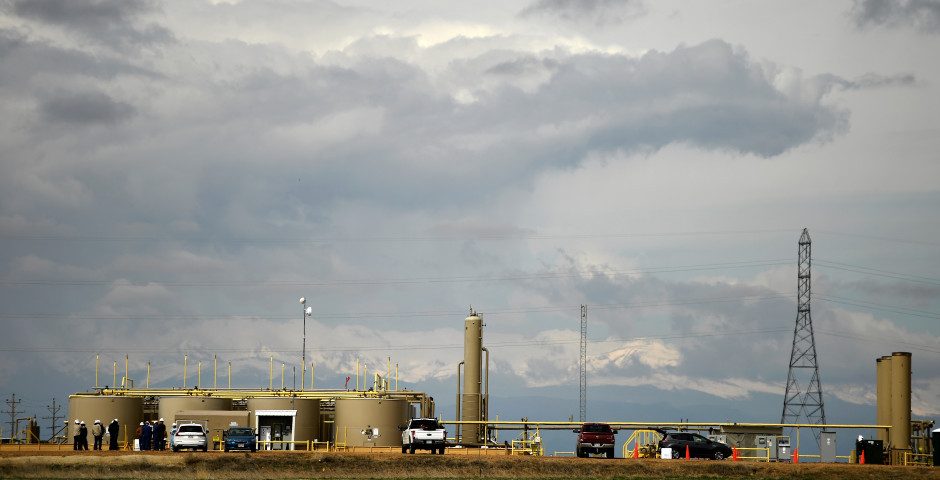 One of the speakers at a hearing Wednesday on a new oil and gas law said it doesn’t look like Colorado’s oil and gas wars are over.

Roger Bailey with Liberty Oilfield Services was referring to remarks by Gov. Jared Polis when he signed Senate Bill 19-181 into law in April. Polis said he hoped that with the signing of the law, “the oil and gas wars that have enveloped our state are over and the winner is all of us.”

“Right now I don’t think anybody in this room believes that the oil and gas wars are over,” Bailey said.

That statement drew applause. Other comments by oil and gas workers about the industry’s commitment to responsible development and its economic benefits were met with coughs, finger-snapping, heckling and signs with a drill rig and a big red “F” for Colorado’s air quality. Things became so testy, the Colorado Oil and Gas Conservation Commission took a break during the public comment period.

As the comment period wrapped up, several people, some of them members of environmental and community organizations, held up banners and repeated statements in unison and chanted such slogans as “Keep the carbon in the soil. No more fracking, no more oil.”

The noisy session led up to the COGCC’s vote on the first set of rules that will implement SB 181, intended to overhaul the state’s oil and gas regulations to prioritize protecting public health, safety, the environment and wildlife. The commission on Wednesday approved authorizing administrative law judges and hearing officers to issue decisions in certain matters so the commissioners can spend more time on new regulations.

Putting the new law into place is expected to take more than a year and will entail public hearings and the writing of rules covering a number of areas, including public health, well structure, abandoned wells, reducing emissions from oil and gas wells and bonds to ensure the cleanup of sites.

Activists and members of Front Range communities where drilling is occurring have called on state officials to not issue any new drilling permits until the rules are completed. To do otherwise, they insist, violates the new law.

However, state officials have said it was never the intent to place a moratorium on oil and gas permits. During legislative debate of SB 181, the bill’s sponsors repeatedly disputed the industry’s arguments that the regulations would cripple or shut down the industry.

The governor’s office and Coloradans, who overwhelmingly rejected a 2018 ballot issue to greatly increase buffers around wells, have rejected moratoriums, said William Allison, a spokesman for Energy In Depth, an education and public outreach campaign by the Independent Petroleum Association of America.

But several speakers questioned why the COGCC is approving new oil and gas permits before the new regulations are in place.

“Why are profits still being put over people’s health? Can you tell me with any certainty that the air quality right now is healthy for children living here right now and they are not being exposed to (volatile organic compounds),” asked Kathryn Maciula.

Volatile organic compounds are emissions associated with oil and gas drilling and production. They contribute to smog and can cause respiratory and other health problems. Maciula said she and her children became sick when wells were drilled near their home in Erie. The family moved after blood tests showed they had high levels of benzene, a byproduct of oil and gas production and known to cause cancer.

“We were lucky to be able to leave, but what about those who can’t? Our friends are still here,” Maciula said.

The COGCC has approved 339 drilling permits and 40 permits for well locations since SB 181 became law. Until the health and environmental regulations are written, COGCC Director Jeff Robbins can hold up approval of permits that, based on a set of criteria, he thinks warrant further scrutiny.

Roughly 60% to 70% of the permit applications with issues outlined in the criteria have undergone additional review, and some have been sent back to the applicants.

During the hearing, speakers questioned the kind of criteria Robbins is using and whether the COGCC staff has reviewed scientific studies on the health impacts of living near oil and gas wells. Several cited the air quality along the Front Range, which doesn’t meet federal ground-level ozone standards, and fossil fuel’s role in climate change.

A few times during the public comment period, Dan Gibbs, COGCC chairman, asked people to be respectful and not intimidate speakers.

“We want people to feel comfortable,” said Gibbs, who is executive director of the Colorado Department of Natural Resources. “I feel like that’s the Colorado way.”

In a statement, the governor’s office said, “We urge everyone to be respectful of the process as the COGCC implements rules to ensure the health and safety of Coloradans.”

In a tweet, Dan Haley, president and CEO of the Colorado Oil and Gas Association, said, “Make no mistake, the ugly intimidation tactics at today’s COGCC hearing are meant to shut down the voices of Coloradans and upend democratic processes.”

“The 232,900 Colorado women and men whose livelihoods depend on the natural gas and oil industry love this state every bit as much as those who seek to end the American energy renaissance,” Lynn Granger, Colorado Petroleum Council executive director, said in a statement.

But opponents of issuing new permits said the anger and emotion stem from the feeling they’re not being heard .

“There’s a lot of anger and emotion, a lot of fear and despair in this room. These people are very scared for what the impacts of fracking and all other types of extraction in this state, in this country and in our world, for what that will do,” said Jesse Newman, an organizer with the group Extinction Rebellion.