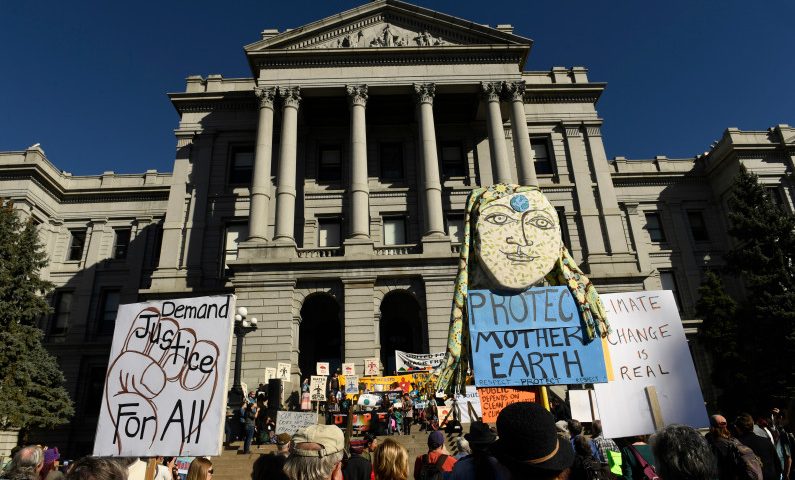 Protesters hold up signs as they participate in a youth rally on the west steps of the Colorado Capitol Building on February 20, 2017 in Denver, Colorado. Hundreds gathered and marched to rally support for the upcoming court hearing on fracking and climate change. Six youth, including Xiutezcatl Martinez, and attorneys from Our Children's Trust, filed a lawsuit against the Colorado Oil and Gas Conservation Commission against fracking and recognizing climate change as well as to protect constitutional rights to a stable climate system. They claim the commission is abusing its power by permitting the fossil fuel industry to extract further oil and gas before protecting the health and future of it's citizens. Helen H. Richardson/, The Denver Post

Colorado Attorney General Cynthia Coffman on Tuesday fired off a 68-page argument urging the Supreme Court to overturn a legal ruling requiring the protection of people and the environment before oil and gas drilling can be done.

She’s pressing the case that the phrase “in a manner consistent with” in Colorado’s evolving oil and gas law is unambiguous and means balancing industry interests with health and the environment — rather than ensuring protection as a precondition that must be met.

If the state Supreme Court justices agree, they could reverse the existing legal ruling that requires protecting people and the environment before the Colorado Oil and Gas Conservation Commission can issue drilling permits.

The Colorado Court of Appeals issued that ruling in March 2017 in the Martinez case, brought on behalf of teenagers fighting ill effects of fossil fuels extraction such as faster global warming.

A state news release quoted Coffman as saying:  “State law creates a balance between development of Colorado’s oil and gas resources — which are tremendously important to our economy and serve as a source of reliable energy — and our other core values, including environmental protection.”

The COGCC over the past year has continued to issue permits allowing drilling new wells, some of them controversial as residents object to industrial operations inside communities along Colorado’s increasingly populated Front Range. Oil and gas companies have drilled more than 56,000 wells statewide, bringing jobs and other economic benefits, and they plan to drill thousands more.

Colorado Department of Natural Resources officials also declined to discuss the case. “We view it as something that is in litigation and will not comment,” agency spokesman Todd Hartman said.

State lawmakers have charged the COGCC with fostering “responsible, balanced” development, production and use of oil and gas “in a manner consistent with protection of public health, safety, and welfare, including protection of the environment and wildlife resources.”

“An unprecedented decision from the Colorado Court of Appeals threatens to shut down all new oil and gas development in Colorado due to alarmism over so-called climate change,” the group said in a news release.

This matter arose in 2013 when Xiuhtezcatl Martinez of Boulder and other teenagers asked the COGCC to consider a new rule. They proposed that Colorado not issue any new permits for oil and gas drilling “unless the best available science demonstrates, and an independent third-party organization confirms, that drilling can occur in a manner that does not cumulatively, with other actions, impair Colorado’s atmosphere, water, wildlife, and land resources, does not adversely impact human health and does not contribute to climate change.”

When COGCC officials in 2014 declined to adopt a rule, the teenagers appealed, backed by the Oregon-based group Our Children’s Trust, which has pushed for better environmental and health protection in 44 states — and won.

But state attorneys now contend that the appeals court judges misinterpreted Colorado’s oil and gas law. “Considered in its entirety,” their filing says, the law “required (COGCC) to balance a number of different policy goals, including fostering the responsible and efficient development of Colorado’s oil and gas resources.” And the COGCC “may not override this stated policy of the general assembly in pursuing the act’s other objectives.”

“Even assuming the act is ambiguous,” state attorneys wrote, the COGCC’s “long-standing interpretation of the act to require regulatory balancing has been formalized through a series of rulemakings. That interpretation is therefore entitled to substantial deference.”

Our Children’s Trust attorney Nate Bellinger countered that environment and public safety protection “is obligatory and not a factor to be balanced.”

“The role of courts is to follow the will of the general assembly. …  And the COGCC is not doing that. We are asking the agency to do what the lawmakers told them to do,” Bellinger said.

Environment groups were preparing to file their own legal briefs, anticipating that justices may hear oral arguments in the fall.

“State lawmakers changed the law in 2007 because they wanted to put the public health, safety and welfare, and protection of the state’s wildlife resources, first and foremost in the Colorado Oil and Gas Conservation Commission’s considerations,” EarthJustice attorney Joel Minor said. “That’s what the text of the statute says. That’s what the court of appeals decided. That decision was correct.”