Number of Canadians employed by oil and gas sector falls by 14,000, data shows

Number of Canadians employed by oil and gas sector falls by 14,000, data shows 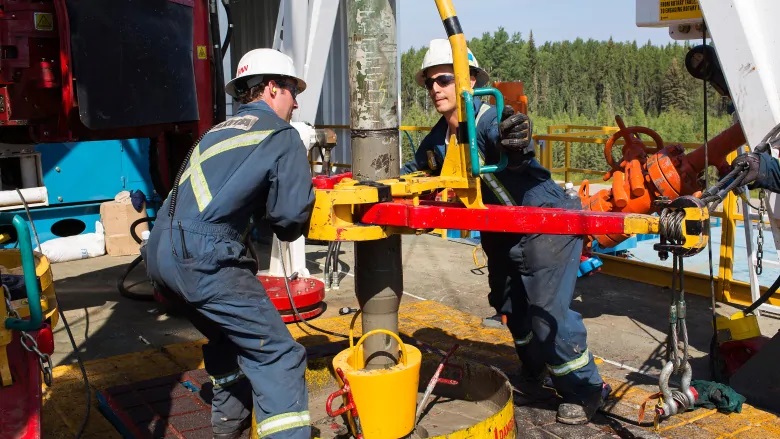 Monthly employment data suggests the number of people working in Canada’s oil and gas sector has fallen by more than 14,000 so far this spring, as the sector deals with low oil prices and the economic impact of COVID-19.

“It’s not just the COVID-19 impact, but also the low oil and gas prices, which are continuing,” said PetroLMI vice-president Carol Howes of the jobs figures.

“We do expect to see some additional layoffs in the next coming months and into next year.”

Howes said she’s not expecting the kinds of layoff numbers witnessed a few years ago after the decline in oil prices in 2014, when direct employment in the oil and gas exploration, services and pipeline sectors stood at about 226,000.

“The sector is already quite, quite thin in terms of the number of people working in the industry,” Howes said. “As a result of that, we only have so much we can cut, so many places we can cut in terms of employment.”

North America’s oil industry has been hammered by the economic impact of the COVID-19 pandemic, with demand for fuel plunging as an international price war flooded the market with cheap crude.

The situation spurred oil and gas companies to slash production and cut their capital spending plans by billions of dollars this year. It has also led to job losses.

On Thursday, oil and gas producer Ovintiv — formerly known as Encana — said it has slashed its workforce by 25 per cent as it prepares for more modest growth in the energy sector. The decision affected roughly 650 jobs.

Earlier this week, pipeline giant Enbridge announced that 800 people working for the company would be taking voluntary buyouts, including early retirement, as it aimed to avoid layoffs.

Howes said the sector most affected so far appears to be the oil and gas services sector.

“They’re the first sector to be impacted and mostly because if you’re not drilling for oil and gas, those are the jobs that are most directly impacted by layoffs,” she said.

Elizabeth Aquin, interim president of the Petroleum Services Association of Canada, said a survey of their members in recent weeks found many had seen layoffs in the order of 35 to 50 per cent this year.

She said a tough few months has come on top of several tough years, adding service companies do not want to lay off any more people.

“These workers have years of experience and we are renowned around the world for that technological expertise and our innovation,” she said. “We need to keep the skills and expertise.“

She said while companies in her sector have shed thousands of jobs, it would be worse without the federal wage subsidy. But, she added, not every company that needs the program was able to qualify.

Ottawa also announced that it would spend $1.7 billion to help clean up orphaned and inactive oil and gas wells in Alberta, Saskatchewan and B.C., a move it’s hoped will put some people back to work.

Tristan Goodman, president of the Explorers and Producers Association of Canada, said much of how the coming months play out for the energy sector and its workers depends on pricing and government policy.

He said if benchmark oil prices stabilize above $40 US a barrel — or better still, $45 US — it would help. On Friday, the price of West Texas Intermediate close just shy of $40 US.

Goodman said it will also be important to see how the policies of various governments take hold, including federal loans and loan guarantees aimed at helping small and mid-sized companies stay afloat during the downturn.

“It all comes back in the end to workers,” he said. “It is people, families, jobs.”

There are still many opinions on how quickly economies and oil prices will stabilize given the unpredictability of the COVID-19 pandemic and its impact on industries and consumers.

Matthew Fitzsimmons, vice-president of energy service research at Rystad Energy, believes the employment picture in Canada’s oil and gas sector will be difficult until capital investment returns to a more normal state.

“But we would expect those jobs, as investment picks up, to come back. It won’t be like flipping a light switch necessarily, because we do see a long road to recovery from a spending standpoint versus where we were in 2019.”

He said Rystad’s expectation is that investment will bottom out in late 2020 and start to increase in 2021, but believes it could take a couple more years to recapture the spending levels seen in 2019.