India to leverage its Strategic Energy Partnership with US 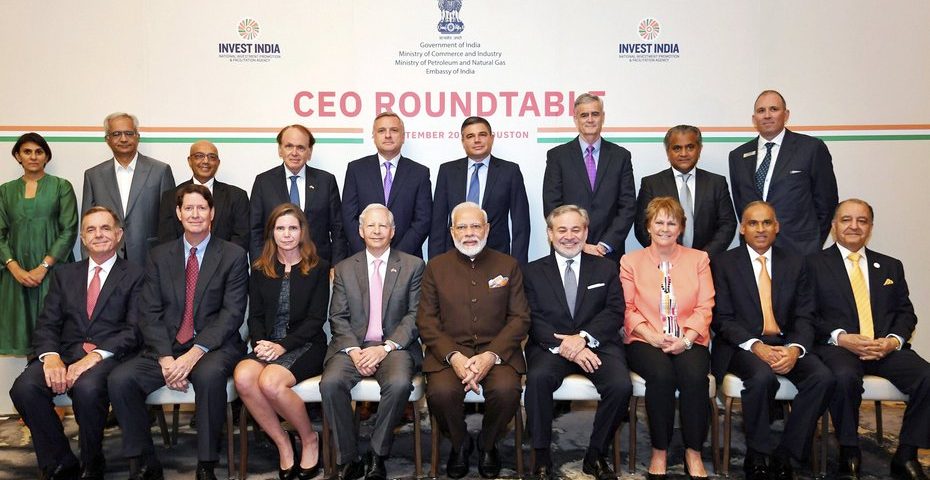 Even as all eyes are on the ‘Howdy, Modi’ show in Houston, Texas, today, the first meeting of Prime Minister Narendra Modi is actually the most important of the visit, both in terms of the Indian economy and in adding some solid bolstering to the India-US relationship. In today’s diplomacy, as Foreign Minister S Jaishankar notes, relations are determined by interests, not historical reminiscences.

Appropriately enough, the prime minister was met at Houston, by Director, Trade and International Affairs, Christopher Olson and other officials, including the US Ambassador to India Kenneth Juster. It is tempting to compare this to Pakistan prime minister Imran Khan’s less than glorious reception in New York, but this is about India’s growth story, and not about the entirely separate issue of Pakistan.
PM meets oil majors ahead of Howdy, Modi; balancing Trump bonhomie, Tehran outreach key to ensuring energy security

From the airport, Modi went straight into a meeting with energy bigwigs including CEOs of companies such as BP, Exxon Mobil, Schlumberger, Baker Hughes and others. As Jaishankar earlier pointed out, energy is the major new part of the India-US trade mix. The fact that India already import about $4 billion worth of oil and gas from the United States is now well known, and there is a sense that this import could double in the future.

As the US Energy Information Administration happily notes, India is the third largest energy consumer after the US and China. Recently, Petroleum Minister Dharmendra Pradhan said India may well become the top consumer in a decade. That’s not something to celebrate, unless that consumption is diversified, and home grown.

It is true that an indicator of slipping growth is that consumption patterns in terms of crude import dependency has only marginally grown over the last year. But this still remains at above 82 percent. According to official statistics India spent $111.9 billion on oil imports in 2018-2019, up from $87.8 billion in the previous fiscal year. Local production is more or less stagnant, while production from overseas oil fields has marginally increased from about 33 percent to 36 percent of the total production.

That’s not what the prime minister wants.

In 2015, he asked for a continuous reduction in imports, to reach half the present figures by 2030, or at least to about sixty percent by the next two years. That aim is at the crux of the meetings. In The US would like India to import. Delhi would rather the US invests.

Engaging US energy majors, who have considerable final clout, is perhaps even more important than engaging with the mercurial US president Donald Trump. According to data, energy companies are among the top contributors to Republicans. Exxon Mobil alone is reported to have contributed $300,000 in campaign funds.

This is a trend that has continued over the years and is only likely to increase. The logic goes then that keeping these companies engaged on a long-term basis is good for bilateral relations. As the Petroleum Ministry recently announced, India is already seeing Rs 5 trillion in investments in everything from exploration to laying pipelines. There’s more where that comes from, with the ministry directing opening up unexplored areas. Some six basins identified have resources the equivalent of 41.872 billion tonnes of oil. India is also aiming to be a refining hub, offering almost 25 to 50 percent less in capital costs compared to others. And don’t forget a 100 percent FDI is allowed in private refining companies. Those are numbers companies like.

The final trade deal that is to be signed later will be substantially about the energy industry, and hopefully a long-term relationship, rather than just a import-export one. All of this marks a considerable shift in Delhi’s geo-economics, where the once huge dependency on West Asia is rapidly being overrun by the US, with imports jumping four-fold in the last financial year.

All of this hasn’t stopped Delhi from going to traditional friends when in a tight corner. Following the recent attack on Saudi oil fields allegedly by the Houthis of Yemen, and which almost halved production, India hurriedly turned to Rosneft of Russia for assistance. India is equally engaged with Russia in terms of not just developing Indian oil and gas sectors, but also in investing in Russia oil fields. Meanwhile, there is also a reach out to Iran again, and that too will be part of the meetings discussions at Houston.

In energy, as in everything else, the Modi government is intent on balancing its options. If President Trump is being courted with the ‘Howdy, Modi’ event just before US elections, there is also a determined push to get Tehran back on board. This is a policy far more refined than one of running with the hares and hunting with the hounds.

Remember, Foreign Minister Jaishankar rather irritably advising reporters to “get over the Cold War mindset’. In that conversation he was referring to the fact that China was not a target of closer India-US relations in terms of the Indo-Pacific narrative. With a foreign ministers meeting of the ‘Quad’ — the grouping of India, US, Australia and Japan — coming up in New York, this is foreign policy jugglery of a very high order. Not even ministry insiders can tell you how many balls are spinning up there, as the Modi-Jaishankar duo go on their travels.